The words of the LORD are pure words: as silver tried in a furnace of earth, purified seven times. 7  Thou shalt keep them, O LORD, thou shalt preserve them from this generation for ever. (Psalm 12:6-7, KJV)

Without further ado, here is that limerick:

those false hearts, being Hell-hexed,

Thus, Scripture fraud, they made a foul sport.

As Vaticanus those 2 foes kissed,

with Sinaiticus, its twin,

due to Tischendorf’s spin  —

Westcott’s team had feigned to agree

But the snake hissed, long ere that day,

The lie was nothing new under the sun.

Not all fell for Westcott-Hort’s sludge;

For one, Dean Burgon did not budge;

While Genesis, some did deny,

The conflict will not soon disappear;

The test is: do we God’s Word revere?

The main point, here, is that it’s a very bad idea to corrupt the original God-given texts of the Old and New Testament of the Holy Bible, which are miraculously jot-and-tittle perfect.   For details on how complicated such corruption can be, see the detailed scholarship of Dr. Bill Cooper, in his forensically focused rebuttal of Codex Sinaiticus, a “darling” of the ‘Critical Text’ revisionist camp:  THE FORGING OF CODEX SINAITICUS (Creation Science Movement, 2016;  140 pages  —  see  https://www.amazon.com/Forging-Codex-Sinaiticus-Bill-Cooper-ebook/dp/B01E1SUPRO ). 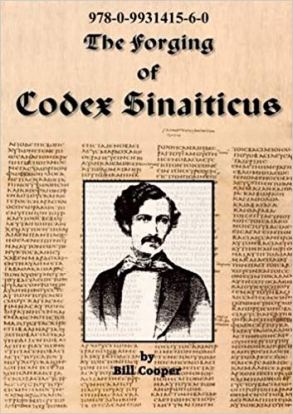 A host of similar scholarship (by Dr. D. A. Waite and others) can be accessed via  http://www.biblefortoday.org/ .   Likewise, the scholarship of David Daniels has contributed very relevant research, presented in very readable books, including his IS THE ‘WORLD’S OLDEST BIBLE’ A FAKE?  HOW A 19TH CENTURY HOAX AFFECTS YOUR FAITH (Chick Publications, 2017), and DID JESUS USE THE SEPTUAGINT? (Chick Publications, 2017), both available via http://www.chick.com .

The bottom line  —  regarding the historical transmission of God’s Word to us, over many generations  —  is that God Himself has providentially preserved the original texts of the books of the Old and New Testaments, and they were transmitted to us by what we call the Masoretic Text (of the Hebrew/Aramaic O.T.) and the Received Text (of the Greek N.T.).  Many Scriptures teach reverence for God’s Word, including Psalm 12:6-7; Matthew 5:18; Psalm 138:2; 2nd Timothy 3:15-16; John 5:44-47; John 17:17; Psalm 119; etc., etc.

One thought on “Critiquing the ‘Critical Text’ Critics”