Are Danish School Kids Being Tested like Guinea Pigs?

But Daniel purposed in his heart that he would not defile himself with the portion of the king’s meat, nor with the wine which he drank: therefore he requested of the prince of the eunuchs that he might not defile himself.  Now God had brought Daniel into favor and sympathy with the prince of the eunuchs.  And the prince of the eunuchs said unto Daniel, I fear my lord the king, who hath appointed your meat and your drink: for why should he see your faces worse liking than the children which are of your sort? then shall ye make me endanger my head to the king.  Then said Daniel to Melzar (whom the prince of the eunuchs had set over Daniel, Hananiah, Mishael, and Azariah), Prove [i.e., test, put to trial] thy servants, I beseech thee, 10 days; and let them give us pulse to eat, and water to drink.  Then let our countenances be looked upon before thee, and the countenance of the children that eat of the portion of the king’s meat: and as thou seest, deal with thy servants.  So he consented to them in this matter, and proved [i.e., tested] them 10 days.  And at the end of ten days their countenances appeared fairer and fatter in flesh than all the children which did eat the portion of the king’s meat. Thus Melzar took away the portion of their meat, and the wine that they should drink; and gave them pulse. … And in all matters of wisdom and understanding, that the king enquired of them, he found them ten times better than all the magicians and astrologers that were in all his realm.   (Daniel 1:8-16 & 1:20)

As the world faces the need to speedily (yet safely) recover from quarantine-like lockdowns, some fear the danger of over-delayed returns to normal (or near-normal), while others fear the opposite—assuming that Coronavirus contagion is still a greater evil than continuously hunkering down at home.

Denmark eased its coronavirus lockdown on Wednesday by reopening schools and day care centres, but concerns they might become breeding grounds for a second wave of cases convinced thousands of parents to keep their children at home. The rate of new cases is falling, but the government’s decision has led to a heated debate over how to balance the needs of the economy and the safety of the population – in this case its youngest citizens.(1)

For example, in Denmark, some parents opine that their children are safer at home than at the schoolhouse. 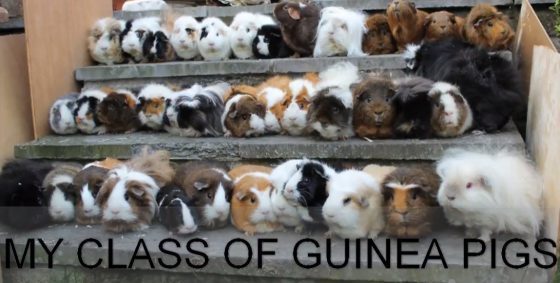 “I won’t be sending my children off no matter what,” said Sandra Andersen, the founder of a Facebook group called ‘My kid is not going to be a Guinea Pig’ that has more than 40,000 followers. “I think a lot of parents are thinking, ‘Why should my little child go outside first’,” said the mother of two girls aged five and nine.(1)

Parental choices—about health, safety, and whatever else is best for children—are part of what parenting is all about. But comparing children to “guinea pigs” is quite a jarring notion.  In the minds of most folks, “guinea pigs” are the equivalent of “lab rats”.

Whenever rats are used for scientific experiments, in laboratories (or elsewhere) they are nicknamed “lab rats” – with some serving as the “control” group, to be compared with the “experimental” group, the latter being subjected so some kind of experimental event or condition,  similar to the controlled experiment devised by the prophet Daniel, in Babylon.(2)

Traditionally the rat most often employed, for laboratory experiments, has been the albino variety of Norwegian Rat (Rattus norvegicus).

Regardless of how heroic some rats have been, historically, surely no caring parent wants his or her child to be treated as a “lab rat”—or a “guinea pig”!

But, biologically speaking, what are “guinea pigs”? The name is misleading—they are not pigs; also, they did not originate from Guinea.

Like rats, mice, squirrels, voles, and prairie dogs, the “guinea pig” (Cavia porcellus) is a relatively small rodent, not at all belonging to the swine family (just as “hot dog” is food hopefully having no canine ingredients!).

Nowadays, this rodent–also called a “cavy” (or “domestic guinea pig”)—usually grows no bigger than a rabbit, but in earlier times much larger versions once lived and died—and sometimes became fossilized.(4)

These rodents, in the wild, thrive in grassland habitats, such as the pampas of South America. Guinea pigs are not known (so far) as burrow-builders, yet they have been observed to “borrow” the burrows built by other animals, or to take shelter in rock crevices that may be conveniently available.(4)

Unlike small mammal stockpilers—such as the “haypile”-hoarding pika, who accumulate vegetation for winter food needs—guinea pigs acquire and eat grass (and other plant material) like hunter-gatherers, migrating (in “herds”) to find available food, in reaction to changing environmental conditions.(4)

For many, however, guinea pigs are just cute little pets!

Biblical creationists should have a special appreciation for guinea pigs—and not just for their usage as experimental animals. The first scholarly research, on guinea pigs, was published by Dr. Konrad Gessner, a Swiss young-earth creationist.(5)

Dr. Gessner provided an enormous foundation for the intertwined sciences of creation ecology and creation biology (including their sub-disciplines, creation zoölogy and creation botany), back in the mid-1500s—descriptively documenting the guinea pig’s biology in 1554.(5)

But appreciating the experimental role and reputation of the guinea pig is one thing—yet having one’s child treated like a guinea pig (or a “lab rat”) is quite another.  So it is easy to sympathize with the Danish parents who are among the more than 40,000 followers of the ‘My kid is not going to be a Guinea Pig’ Facebook group.

And yet the healthcare-vs.-recovery dilemma is really not that simple. Are the children who return to school the experimental “lab rats”, with the stay-at-home kids serving as the “control group”?  Or is vice versa the case, with the staying-at-home children serving as the real “guinea pigs”, while the returning-to-school kids are restored as the real “normal” standard?

Now as always—in Denmark and everywhere else—parents need God-provided wisdom to best care for their children.

2.     Daniel chapter 1 illustrates the classic approach for scientific experiments. “In Chapter I of his book, Daniel gives the account of his use of classical experimental design—a technique to control variables that might bias a scientific research project—in order to acquire knowledge and test a hypothesis. … Daniel’s proposed research was set up along what is known as the classical [i.e., empirical science] experimental design … composed of control and experimental groups, with each group being subject to a before-and-after test.” Treece, Jr., J. W. 1990. Daniel and the Classic Experimental Design. Acts & Facts. 19(3), posted at https://www.icr.org/article/daniel-classic-experimental-design .

3.     Ironically, the behavior of Black Rats (Rattus rattus) in the wild, transmitting the (Black Death) Plague of the bacterium Yersinia pestis, has been used as God’s instrumentality for teaching irreverent humans — and for testing them regarding theological truth! See 1 Samuel chapters 4—6, analyzed in Johnson, J. J. S. 2016. Evolutionary Naturalism vs. Biblical Providence. Acts & Facts. 45(4):21, posted at http://www.icr.org/article/evolutionary-naturalism-vs-biblical/ .

5.     Dr. Konrad Gessner was a multi-disciplinary Reformation scholar (and a close friend of Heinrich Bullinger, one of the Swiss Reformation’s most influential Reformers) – complementing his medical practice and scientific research with teaching ministry as New Testament Greek professor in Lausanne, before providentially moving to Zürich (near Glattfelden, home of the Glattfelders, some of whom came to America, providentially, during A.D.1743), to serve as lecturer in physics, as well as to pioneer and meticulously document research in the infant science of paleontology. See Hoesch, W. A. 2007. False Political Correctness in the Sixteenth Century. Acts & Facts. 36(1), spelling his name as “Conrad Gesner”), posted at http://www.icr.org/article/fossil-political-correctness-sixteenth-century  .