(Like an Orphan Manatee, Distressed Economies Need a Rescue) 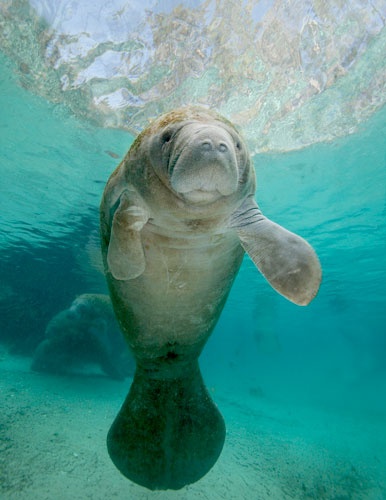 Necessities–during perilous times of crisis–can be keys to forming new friendships, an orphaned baby manatee learned earlier this month.(1)  Maybe there is also a lesson for us humans.

“Keys”, here, refers to the Florida Keys, the string-like archipelago of islands that trail southwardly below the south peninsula of Florida’s mainland. The Florida Keys have been physically connected—for railway, by the Henry Flagler system of bridges, since 1912—and by U.S. Highway 1, for automobile travel, since 1928.(2)

Being islanders, residents of the Keys often visit their docks. And it’s not unusual for sea creatures to visit shorelines near docks.  Likewise, it’s not a big surprise for a manatee to be spotted under a boat-dock. But this one needed help.

Islamorada. An orphaned infant manatee was rescued Saturday [May 2nd] after being spotted by homeowners that there was something beneath underwater rocks along their dock. The Dolphin Research Center’s (DRC) Manatee Rescue Team and volunteers with Dolphins Plus Marine Mammal Responder unit assisted the Florida Fish and Wildlife Conservation Committee to corral the calf with netting. They then successfully scooped the manatee from the water using a large hoop net.(1)

Manatees are sirenians, like dugongs, marine mammals that are torpedo-shaped and massive, somewhat like cetaceans (whales and dolphins) and pinnipeds (seals and walruses), accustomed to eating aquatic vegetation in tidal coastwaters. (3)

The Manatee is primarily a nocturnal and moderately social animal that congregates in warm water in winter [e.g., in coastal waters of the Florida Keys]. It can swim quite rapidly for a short distance. … Propelling itself with undulations [like a caterpillar] of the hind end of its streamlined body, the Manatee uses its flippers and tail mainly for steering and stabilization. … The manatee browses on aquatic vegetation, particularly water hyacinth and hydrilla [two prolific “pest plants” that clog and choke waterways].(3)

The baby manatee was rescued at the key Islamorada, which is located on U.S. Highway 1, about 16½ miles south of Key Largo and about 35½ miles north of Seven Mile Bridge.(1),(2)

Islamorada, Village of Islands is located in the beautiful Florida Keys. … Islamorada is a tourism-oriented community an hour south of Miami consisting of four islands spanning 18 linear miles with a land area of approximately 3,900 acres.(2)

So, what happened to the baby manatee after she was rescued?

According to the DRC [Dolphin Research Center], the manatee may have been without its mother for several days, saying that was an unusual amount of time for the pair to be separated. They did not know why the calf separated from her mom. She [i.e., the baby manatee, not the mother] was taken to Miami Seaquarium for treatment and rehabilitation.(1)

The most famous of the Florida Keys, however, is Key West, an island with a colorful history of pirates, shipwrecks, “pink gold” (i.e., shrimp), Caribbean island-style Jimmy Buffet music, sponge harvesting, wild chickens in city streets, and for a very short time—a revolt against the United States of America!(4)

The theatrical announcement, 38 years ago, was dramatically accented by a single gunshot fired, at Mallory Square, before reporter cameras–followed by the mayor announcing an immediate surrender of the Conch Republic (to the USA), with an official request for “post-war” economic reconstruction money.(4)

The Conch Republic was born on April 23, 1982, in response to a United States Border Patrol Blockade of the Florida Keys. Since the United States insisted on treating the Keys like a foreign country, Mayor Dennis Wardlow seceded from Union. Today we stand proudly as a community who have a “Sovereign State of Mind” and as the “People who seceded where others have failed”.(4)

Stresses—of all sorts—are unavoidable in this mortal life, yet God is there to help us successfully survive them.(6)

Some are a mix of politics and economics, like the business-choking pressures in Key West, during 1982, that were resolved by Key West briefly becoming the war-declaring “Conch Republic” that immediately “surrendered’ to America, in order to plead for “post-war” reconstruction aid.(4),(5)

Other stresses are more intensely severe, like an infant (human or manatee) becoming orphaned and abruptly independent. But, at least in the case of the orphaned manatee infant at Islamorada, there is a fairly happy ending to the story—a successful rescue followed by an adoption-like new beginning.(1)

DRC described the female as less than four feet long, considered underweight at 65.5 pounds. She was diagnosed with a bacterial infection. On Sunday [May 3rd] afternoon, a Seaquarium veterinarian said the manatee was in “guarded condition.” After evaluation and treatment, she was placed in a pool with an older orphaned female manatee. Those caring for the small calf said she is sticking close to the older orphan’s side.(1)

Meanwhile, we are directed to pray for our Heavenly Father’s kingdom to come, and His will to be done, on Earth as it is in Heaven. And the time will eventually come when Christ reigns upon our planet, as time of heaven-on-earth, full of blessings for both man and beast, including no-longer-stressed manatees.(7)