And the Amorites, which dwelt in that mountain, came out against you, and chased you, as bees do, and destroyed you in Seir, even unto Hormah. (Deuteronomy 1:44)

May and June are abuzz with busy bees, really clever bumblebees.(1),(2)  And their practical cleverness continues to astonish researchers, as a recently published study in the journal Science illustrates.(3),(4)

As a matter of historical context, bees (whether you men the rounder “bumblebees” or the surplus-honey-producing “honeybees”)—by their very enigmatic existence and astonishing abilities—have been delighting Biblical creationists (and embarrassing anti-God evolutionists) for many generations.(1),(5),(6) ,(7)

Bees can even distinguish different humans from each other, as individuals, retaining memory of who is whom.(1),(5)  Bees demonstrate remarkable math skills and communication abilities, including their use of “waggle dance” to inform other bees about where to find food–with communication accomplishments that proved clearly-seen proof that they are created and equipped (and providentially programmed by the infinitely wise, infinitely capable, infinitely clever, and infinitely caring Creator–the Lord Jesus Christ.(2),(5),(6)

The brain of the bee is composed of a mere one million neurons (nerve cells), 0.01% of the neurons of a three-pound human brain. Using this tiny bee brain and associated vision, bees have been able to solve complicated color puzzles and even recognize human faces.  They do this by using their 6,300 ommatidia that comprise the eye. Bees have also been created with the ability to distinguish up to 300 separate flashes of light per second, an attribute they use as they rapidly fly over the changing landscape.(5)

When a foraging bee discovers a new food or water source, it flies back to the hive and conveys the exact coordinates of the resource through a high-tech waggle dance in a figure-eight pattern. The angle of the dance in relation to the sun confers the direction, while the amount of waggling confers distance and the general utility of the resource (e.g., food or water). … An important part of [the information transfer process involves] touching antennas with the dancer bee. Located in the bee’s antennas are highly specific, ultrasensitive mechanosensors that detect the information-rich dancer bee’s vibrations in a range of 265 to 350 Hz. Research has shown that the bees emit several different detectable chemical signals during the waggle dance as well. Sophisticated behavioral communication like this in a seemingly “simple” insect utterly defies evolutionary myth and glorifies our omnipotent Creator.(6)

But there is more, we are now learning. This is no surprise to creation scientists, who expect to recognize and revere God’s glory and creative genius, as displayed in the providential programming and bioengineering of all animals, big and small.

Now, the latest research on bee behavior is showing how bumblebees accelerate the developmental process, of flowering plants, when pollen-hungry bees are not satisfied with the ripeness of the plant’s blossoming.

Scientists have discovered a new behaviour among bumblebees that tricks plants into flowering early. Researchers found that when deprived of pollen, bumblebees will nibble on the leaves of flowerless plants. The damage done seems to fool [or otherwise catalyze] the plant into flowering, sometimes up to 30 days earlier than normal. Writing in the journal Science, the scientists say they have struggled to replicate the bees’ trick in the laboratory.  … Scientists in Switzerland found that when the bees were deprived of pollen, they started to nibble on the leaves of plants that hadn’t yet flowered.(3)

How can “nibbling” on plant leaves accelerate their flowers to bloom (and thus provide accessible pollen), for bees’ benefit?

The bees used their proboscises and mandibles (mouthparts) to cut distinctively-shaped holes in the leaves. But the creatures didn’t eat the material or use it in their nests. The damaged plants responded by blooming earlier than normal – in some cases up to 30 days ahead of schedule. … “[T]he bees are damaging the plants … [and somehow] that’s an adaptation that brings flowers online earlier and that benefits the bees,” said Dr Mark Mescher, one of the authors from ETH Zurich [i.e., Eidgenössische Technische Hochschule Zürich, a research university near Glattfelden, Switzerland — homeland of the famous Glattfelder family], told BBC News.(3)

The Swiss researchers summarized their findings in the journal Science, noting how the bees were successful in hurrying the plants’ pollen production, which benefited the bumblebees—and which showed how bees can non-randomly jiggle the phenological playing-field to their own advantage.(6)

But that summary omitted the comparison of bee-hastened flower/pollen production versus artificial (i.e., human) mimicking of that acceleration.  Surely brilliant scientists could copy (i.e., mimic) the bees’ behavior, and get similar results, i.e., plants flowering earlier than usual. If bees can do it, can’t humans?

When the researchers tried to emulate the damage done to the plants by the bumblebees they weren’t able to achieve the same results.  The bee-damaged plants flowered 30 days earlier than undamaged plants and 25 days earlier than ones damaged by the scientists.  The research team believes there may be something else going on here apart from nibbles. “We really tried to replicate with the best of our ability,” said Prof Consuelo De Moraes, also from ETH Zurich. “It’s possible that the bees also have some cue that they are providing to the plants that is specific to the bee. … [perhaps] secretions that we don’t know about, but it’s something that we plan to investigate.”(3)

In other words, the human experimenters were unable to hurry pollen production at the rate achieved by the bumblebee workers. But there is more to be learned.

The researchers say the damage has a particular pattern that the scientists have learned to recognize … “You see these semi-circular sort of incisions, often in the leaf,” said Dr Mescher. “One of the students was saying that they were eating a salad the other day, and they saw that kind of damage on the leaf that was probably from a bumblebee.” The researchers say that when pollen is available the bees don’t damage plants. They’ve also found this behaviour is in wild bees.(3) 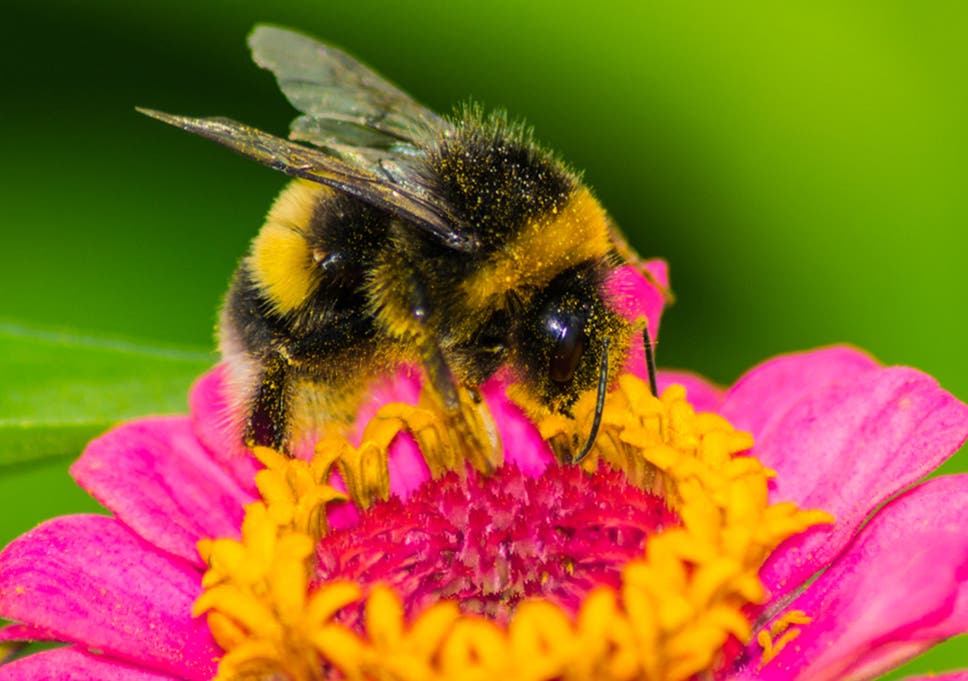 The providential programming of these honey-loving, hive-building, precision-flying, and flower-accelerating insects should prompt observers to admire and appreciate the glorious God Who gave these winged wonders their marvelous hardware-and-software systems, that accomplish these interactive activities.(5),(6),(7),(8),(9)

However, although properly amazed at what bees are doing, evolutionists lamentably assign the credit (for the bees’ wonders) to impersonal-yet-animistic “nature” (i.e., the creation itself), rather than unto the Creator Himself.

“I think it’s fascinating how much we still don’t know about organisms that we think we know really well,” said Prof De Moraes. “It absolutely increases our sense of wonder at the cleverness of nature [sic] in all its many forms.”(3)

But the success of the bumblebees, in proactively modifying the plants whose pollen they seek, requires a cleverness that is truly clever—more clever than the bee scientists themselves.  How so? The Swiss researchers—despite their best efforts—employed copycat thigmomorphogenic mimicry, that only resulted in  hurrying the experimental plants to flower only 5 days early, as compared the bumblebees’ much-superior achievement of accelerating pollen production by 30 days.(3)

In other words, by comparison, the bees’ proactive actions for accelerating pollen production in flowering plants—which demonstrate “phenotypic novelty”(7)—beat  the best copycat efforts of the evolutionists.

Since evolutionists routinely ignore God’s role in all of this, will they infer that their own brilliant brains are inferior to the tiny brains inside the teeny heads of those humble honeybees?(1),(2),(5),(9)

However, to Bible-believing creationists, it all makes good sense—that bees can do such astounding feats—because creation scientists recognize that the infinitely clever and almighty Creator-God providentially programmed these little buzzing bumblebees, to have internal intelligence to do what they busily do.(7),(10)